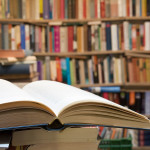 Welcome to week three of Literary Devices for the Real World! I’m talking today about one of those classic high school literary devices teachers and textbooks loved to point out, foreshadowing.

You may remember learning about foreshadowing from poems like The Highwayman and short stories such as The Lottery or The Tell-Tale Heart, and if so, it might be that you associate foreshadowing chiefly with melodrama and literary horror. The idea that foreshadowing = foreboding, however, or that foreshadowing is a tool of literary writers only is a far too narrow understanding of foreshadowing and its function in storytelling. The fact is that foreshadowing shows up everywhere, in all types of stories, literary or otherwise, chick lit or mystery. It can show up in any genre, adding dimension, helping to catch and hold the reader’s interest, and helping to establish or reinforce the tone of a story. Foreshadowing is a device storytellers instinctively use to heighten their audience’s emotional response to their story— even if you don’t specifically set out to include it, you most likely will do so without a conscious effort. Recognizing the variety of techniques for accomplishing foreshadowing and knowing the ways it can strengthen or heighten your story can help ensure that you’re maximizing its potential to enhance your reader’s experience of your story.

Let’s first take a look at some foreshadowing basics. Foreshadowing, by definition, is an allusion to or hint at something yet to happen in a story. It can be subtle, such as a sneeze in chapter 1 from the character who’s going to die of pneumonia in chapter 10, or obvious, such as a direct revelation from the author or narrator (Shakespeare starts Romeo and Juliet by telling the reader/audience that in the story, “a pair of star-cross’d lovers take their life”). Foreshadowing can occur in dialogue (“I forgot you can’t swim. Don’t you get nervous living so close to the ocean?”), imagery (“And for just a moment the boy’s shadow looked as if it wore a crown, but then he turned his head and the illusion was gone”), or through the setting (“Though the rest of the equipment in the little hut was dusty and worn, the rifle above the door gleamed as though frequently cleaned and greased”).

You’re providing foreshadowing any time you give the reader a clue as to what has happened before (which then might conceivably happen again), any time you introduce a flaw or weakness in a character that will prove to be critical to their undoing or raise the stakes in their final conflict, and any time you provide insight into a character’s dreams/ambitions– any of these start the reader, whether consciously or unconsciously, looking for connections/resolution later in the story. People are wired to look for connections and patterns, and as writers, we increase our chances of holding their attention if we drop a breadcrumb– it’s human nature to look for the next one.

Foreshadowing has the potential to accomplishes a whole host of storytelling tasks beyond simply engaging a reader’s attention. Skillful foreshadowing also:

Finally, remember that good foreshadowing creates, rather than spoils, suspense: you don’t want to give so much away in foreshadowing that the climax or reveal or happy ending feels predictable or inevitable. Whether you’re building happy suspense like will-they-or-won’t-they romantic tension, or scary suspense like will-he-or-won’t-he-murder-and-dismember-her tension, give the reader enough to prime his excitement and involve him in the story, but don’t spoil the climax!
What about you? Is most of your foreshadowing consciously or unconsciously done? What methods of foreshadowing do you use most often, and why do they work well for your voice and genre?
Next week, I’ll be looking at tone, how to identify it, and how to further establish and clarify it. If you have a request for a future post in this series, let me know, and thanks for reading!
Share :