It never fails. Each November 1, my Facebook news feed is full of bright-eyed, hopeful, excited writers, eager to embark on their quest to write 50,000 words in 30 days. The camaraderie is awesome. The energy, infectious. And each year there is a teeny tiny part of me that wonders if I sign up, too.

Then, week one ends. The energy, though still pulsing, is a tad weaker. The number of people talking about their goals, less frequent. Then comes the first admittance of failure:

“Stuff came up with the family…can’t finish NaNo this year. :(”

Not a big deal. Those still in the trenches assure that person that there was nothing they could have done to change their situation and that NEXT YEAR it will be different.

But then week two hits. And week three. And you get to the 21st of the month (the day I’m writing this post), and it’s as if NaNoWriMo isn’t even taking place. Of my thirty-plus Facebook friends who had advertised their participatin in NaNo, a small handful remain. And even then, their updates are sparse, full of stress. Full of doubt. They’ve been beaten down and they don’t know how they’ll pull through.

This is why I hate NaNoWriMo. It sets writers up to fail.

As if writers need yet another reason to question their craft. To doubt whether they’re cut out for this author gig. As if they need another reminder that they can’t do it. They’re failures. They should quit while they’re ahead.

NaNo does this to tens of thousands if not HUNDREDS OF THOUSANDS of writers each and every year. There are over 300,000 signed up for the program this year. Let’s say a two-thirds achieve the 50k in one month goal. That’s 100,000 WRITERS WHO HAVE FAILED.

I hate reading about writers who are frantically trying to fix what went wrong. They’re pulling all-nighters so they can catch up with their word count. They’re ditching family events, putting Christmas shopping on hold. All so that they can try and salvage the wreck. “Failure” is looming, and they’re trying so hard to evade…so hard to pull away. But they can’t. Why?

Most writers simply cannot write 50,000 words in one month.

So why force yourself to this standard? Why not accept that you work at a different pace? WHY PUT YOURSELF THROUGH SUCH TORTURE? Because you just need to plow through? Because you want to see if you can do it? Because this is the only way to turn off your self-editor?

So this is it…this is the main reason I hate NaNoWriMo, the crash diet for those looking to get into some kind of healthy writing lifestyle. I could also mention how even if one finishes the program, it sets writers up for disappointment.  Fact is, no one buys novellas anymore. So your 50,000-word novel? There’s nothing I nor any other agent can do with it. Not to mention that it is SUCH a feat to freaking finish the 50k in 30days task, that few want to take the time to go back and polish their stories. Few want to edit. Few want to rework. And that certainly doesn’t do anyone any favors. Because 50,000 words written in 30 days (most of the writing time taking place late at night) is not going to be publishable material. So the writers walk away, saying they’ll come back to it…which they do, months later, and are suddenly depressed by how much work needs to be done. Most start over.

And even the very mention of NaNo can be an issue. Most writers don’t realize this. Most writers don’t realize that when talking with an agent or editor, the moment they mention “well, I have that NaNoWriMo manuscript that I could dust off…” we’re panicking inside. We’re wondering how to say no. We’re closing the door on the opportunity because most of the NaNo stuff we see is absolutely terrible.

I could go on, but I think I’ve made my point.

I hate NaNoWriMo. I hate what it does to authors. I hate the stress it brings. I hate how it communicates “you are a failure” to so many of my friends. And I hate the stigma that comes with a NaNo manuscript.

So that’s my take on NaNoWriMo…what about you? Love it? Hate it? Or maybe you’re indifferent? Let me know.

This post was and is purely my opinion. I know NaNoWriMo has done great things for some writers, and I’m happy for them. I also know that others truly look forward to it each and every year. I’m not discounting that, and this isn’t me attempting to provoke an argument or conversely, fish for compliments and public affirmation. This is just my two cents, k? K.

Do you miss my marketing posts? Check out my $5 ebook, The Extroverted Writer.

Here’s what readers are saying: “…it doesn’t just tell you the things you should be doing. It shows you how to do those things.” – Chris Kolmorgen, Amazon Review 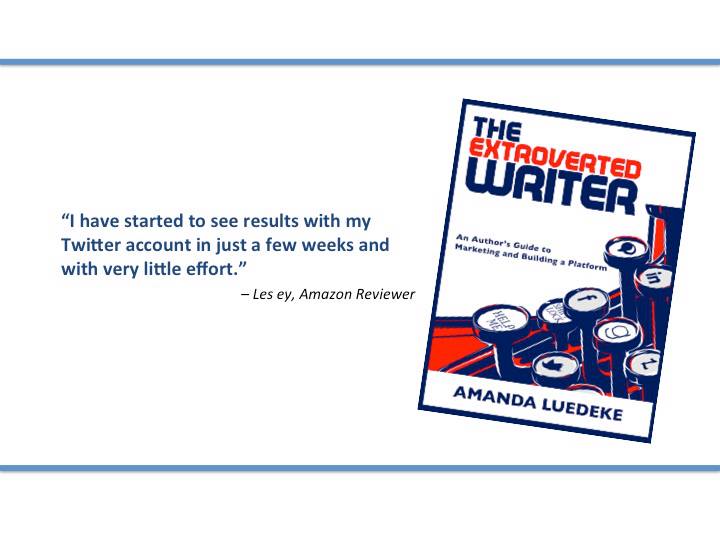