Other cultures fascinate me. I love traveling. But when I married a member of the U.S. Foreign Service, I knew I was signing on for an unconventional life-path. The day we learned our first overseas assignment was China, that unconventionality turned sharply real.

I braced myself for a lot of “news” — new food, new language, new security concerns…. The only thing I didn’t anticipate changing was my work situation. I’m a writer. I work from home. How far could things alter?

How naïve! For someone whose literary endeavors involve history and folklore, research is critical. My introduction to China’s expansive Internet censorship system, the Great Firewall (I wish I’d invented that clever term. Alas, that’s the official moniker.), was not a cordial one. Suddenly, it took ten minutes to load every site I tried accessing. Google—and everything to which it was a gateway—was entirely inaccessible. Progress on my 1920’s novel ground to a halt.

Those first weeks before we installed our VPN, I was not a happy camper. Or writer. Or anything else.

Until it was pointed out that as an author, I couldn’t receive a better gift. Not only was it much harder to anesthetize writer’s block (i.e., procrastinate) via YouTube, but my mind was refreshed and my imagination electrified every time I stepped beyond my Chinese-character embellished welcome mat. When everything around is unfamiliar, life becomes sharper, more vibrant. And for a writer, an energetically buzzing mind is invaluable.

And I discovered The Bookworm, a Western literature themed café that somehow exists in central China. Part restaurant/bar, part library/bookshop, it’s literally wall-to-wall and (ceiling-to-floor) with books. The drink menu is styled like a newspaper, the food menu like a book. Drink specials boast names like “Crime and Peppermint.” Walking into The Bookworm was like wandering into a breathing dream. It’s the place I’ve always dreamed existed in the States but never found. The masters of Western literature had preceded me to China, a reminder that writing is one of the few truly global endeavors, whatever language it adopts. If Austen and Dickinson can flourish here alongside Li Bo and Du Fu, then so can I.

And really, what writer wouldn’t consider forfeiting an appendage for the chance to carry home the research and inspiration only adventure provides?

What/where has provided unexpected inspiration for you? When the muse doesn’t sing so loudly, how do you jumpstart your creativity? 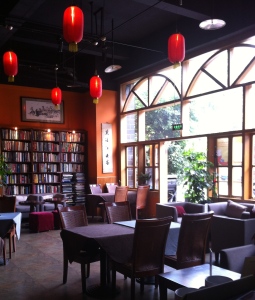 Lauren Peltier is a novelist living overseas. A graduate of Taylor University’s Professional Writing Program, she is working on a novel based on the Irish selkie myth.