I was pleased to be named ACFW’s “Agent of the Year” for 2014. A bit of history… I had a great career, working as the senior agent at another literary agency, Alive Communications in Colorado. But then, ten years ago, I left that job to become a publisher with the old Time Warner Book Group (in a shrewd career move). I was at Time Warner just a couple years, never really feel like I hit my stride, then was cut loose not long after the company was sold to Hachette Livre.

It was July. and I was scheduled to speak at the ACFW conference that September. So I had to send a very tough email to the conference director, explaining that I had been given the boot, and telling her that I’d understand if the organization wanted to un-invite me and get someone else to take my place. I wanted to do the right thing, and let them know that, if I were to attend, the conference would no longer be getting a publisher from a Big Six house. I figured it was the right thing to do. So I sent it off, and about 48 hours later I heard back from them. The president of the organization sent me a very gracious note, telling me that she knew who I was, and they’d still be happy to have me speak, and that the invitation was still in place. It was a lovely gesture, from a great organization, and I realized at the time they were being exceptionally kind to me.

So I went. One of the things I did at that conference was to emcee a general session, in which I asked literary agents like Steve Laube and Lee Hough some questions about industry trends, the role of agents, and the usual stuff people want to know about at panels. Then at the very end of the session, after everyone applauded the participants, I said, “Oh… and I have an announcement: I’m going back into agenting, and starting my own agency.” Afterward, a number of authors came up to meet with me, and my agency was born. I met great people, did several deals, and was off and running. That was eight years ago. Whenever, someone asks me how I ended up representing so much Christian fiction, I tell them that story. So… I owe a LOT to the American Christian Fiction Writers organization. I feel I’m here largely because of their kindness to me. So when they called my name last Saturday night, announcing that they were naming me their “Agent of the Year” for 2014, I was really touched. ACFW is a great organization, I’ve been a longtime supporter, and I was proud to be there to accept the award.

Yeah, this is nothing but bragging. I promise to get back to “ask the agent” questions tomorrow. But first I wanted to take a moment to celebrate, and to say thanks to everyone at ACFW for bestowing this honor on me. I appreciate it very much, and I appreciate the role you’ve played in my success. 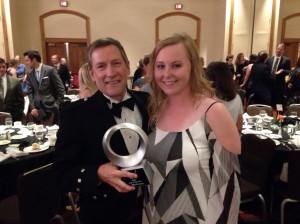