So last week I was supposed to fly from Denver (where I was having publishing meetings) to Nashville (where we were hosting a marketing seminar for our authors). I’m the type that 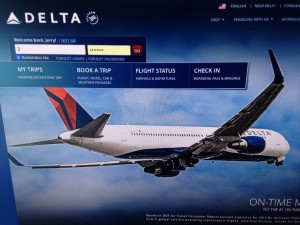 always tries to keep travel expenses low (in the technical term, a “cheapskate”), so I used some Delta miles to purchase a one-way ticket  back in April. I made sure to get a ticket in the late afternoon, figuring if there’s any sort of problem, Delta could always stick me onto a later flight. I had to be in Nashville at 9 the next morning to speak.

So I get to the airport in plenty of time, go to one of those Delta machines… and it won’t check me in. It says there’s a problem, and I have to go stand in line. Grrr. Okay, so I stand in line a half hour, am greeted by a very nice Delta employee who looks sharp but, unfortunately, has the attention span of a Cocker Spaniel, and who informs me that my flight, which routed me through Atlanta, was changed, and they’d be getting me to Nashville, not that night, but THE NEXT DAY. AT 1:30 IN THE AFTERNOON. She smiles sweetly as she says this.

I keep my cool, explain that no, that plan won’t work, I’ve got to speak in the morning, and they need to find some alternative. She looks around, as though I’m speaking a foreign language, then says she can’t find any alternatives. “Um… really?” I ask. “Because I used to live in Nashville, flew in and out all the time, and there are plenty of flights into BNA. It’s only 4 PM, there’s no weather, so maybe you could look again?” She does, but I can’t tell if she really understands the routes, since she twice talks about getting me to Charlotte — which, technically, isn’t Nashville, although I hear they also have great ribs.

Anyway, the line behind me begins to build, and it’s clear she’s getting nervous. So she calls someone, who tells her to put me on another airline. The gal isn’t sure what to do, so I explain that United, Frontier, American, and Southwest all can route me from Denver to Nashville. I watch her call American, wait on hold, stare at the growing line, and get more frantic. Eventually she talks with someone briefly (and by briefly, I mean REALLY briefly), then hangs up the phone and says to me, “Because of the lateness in the day, I can’t seem to get a seat. But if you’ll go to one of the other ticket counters and purchase a ticket, Delta will reimburse you.”

Now, I may live in a small town in Oregon, but I’m no fool. “Um, no,” I explain to her. “They won’t. I know because I went through this with United one time. The gate agent said United would reimburse me, but they never did. I got screwed for about $300. Why don’t you try again?” She looks around, as if she’s forgotten where she was, then calls someone, never actually speaks to anyone, and finally looks at me and says, “If you purchase another ticket, Delta will reimburse you for the cost. I’ll even put that in the notes on this ticket.”

Well, by now I’ve been at this an hour, and I’m no closer to Nashville, so I take her word for it. I walk ten feet away, find the cheapest last-minute fare I can get, and buy a one-way ticket to Nashville that night on Southwest for $457. I grab my boarding pass and receipt, and go back to the Delta line. I wait another 20 minutes, get to the front of the line and say to Miss Cocker Spaniel, “See? I bought another ticket! I’d like Delta to reimburse me!”

Of course she shakes her head and says, “Oh, we don’t do reimbursements here. You have to call for that.”

A red light goes off in my head. “I knew it. Delta is going to screw me, aren’t they?”

“No! I’ve put it right here in the notes. When you call, just give them the ticket number and they’ll be able to find my notes explaining it all.”

Uh-huh. Note to travelers: Don’t take the word of gate agents who remind you of cute puppies. I fly to Nashville, do the marketing seminar, meet with publishers… and call Delta. About a dozen times. I fill in the online forms. I give them my ticket number. I send a complaint letter. Nobody knows anything about my flight to Nashville. They can’t find out anything. I kept expecting one of them to say to me, “Perhaps you dreamed it all…” They lie and stonewall and intend to stick me with a $457 bill that I shouldn’t have had to pay. One person offers to put my miles back into my account — which, um, isn’t exactly a “win” in my book, since I never, you know, actually took a Delta flight. Giving me back my own miles on a flight they screwed up doesn’t strike me as making them eligible for “Customer Service Giant of the Year.”

Finally, a week later, on roughly my fifteenth call, I lose it. When the woman says there are no notes about me buying another ticket, and that no Delta ticket agent would ever suggest buying a seat on another airline, I start yelling… “I run a business! I know that I’m responsible for what the people who work for me say. If they make a promise, I’m on the hook. I bought this ticket because your gate agent encouraged me to — over my own objections! So screw Delta! You people are liars and cheats!”

Her response: “Sir, I’m reporting you to Delta.”

So there you have it. I’m still sitting here, looking at my receipt for the Southwest flight that I didn’t want to buy. Screwed out of $457 by Delta Airlines. Thanks Delta!