When he was in first grade, Chip hurried home one day and announced to his mother, “When I grow up, I’m going to be a book guy!” He clearly could see the future —from high school literary magazine editor to writing bestselling books, from speaking at writing and publishing conferences to representing renowned writers, Chip MacGregor is a book guy.
When I was a kid, my mom signed me up for a diving class. All the beginner classes were full, so she put me in an advanced class. I guess she thought I could learn to dive from the end of a board over the deep end just as well as I could from the side of the pool. I remember doing my fair share of painful dives, and hitting my head a few times. Within six weeks, though, I was doing inwards and back flips with relative ease. 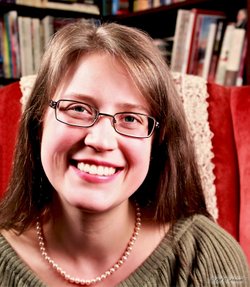 Writing a first book about Martin Luther, a man well covered by the most imminent of scholars, was a little like my first inward dive–naïve, driven, and far outside my realm of experience.
I decided to write a book about Martin Luther while homeschooling. We use a literature-based curriculum, and I just didn’t see a lot of truly great options for older kids to learn about Luther. His story is exciting. I mean, there are knights, war, kidnapping, dramatic escapes, drama, and intrigue. What kid wouldn’t want to read about that? I wanted to write about it–to truly tell his story in a way that communicated all the excitement of Luther’s life and times, without glossing over his character and later life decisions.
My first attempt at Luther was aimed at lower elementary kids, and I took it to my debut writer’s conference, knowing that if I could just communicate the need for narrative biographies for early readers, I could write a whole line of them. After all, such lines exist for important historical secular figures. I knew I was way out on the end of the diving board, but I figured I would at least try. I’m pretty sure I was shaking all four days.
I learned a lot that first conference (where I met Chip, whom I really enjoy), and I went home to write a biography about Martin Luther for middle grade students, as instructed by one of the acquisitions editors I met. I took that middle grade biography back to another writer’s conference, spoke with Chip again, talked to other writing professionals, and went home to write a story for young adults, again following sage advice.
I’m sure industry professionals are aware that historical fiction involving Christian history for the YA crowd is a pretty hard sell in the current market.
My husband Ed and I discussed the hours I spent working on When Lightning Struck! a number of times. Together, we decided that Martin Luther was my writing diving board. Luther’s story was impressed on my heart, I saw a need in the educational market, and I was going to work on the book until it was done. Even if my work never saw the light of day, in the end I’d know how to dive. Or write. Either one. We both feel strongly that God opens whatever doors He wills, so we decided I’d do the work and leave the results up to Him.
I rewrote When Lightning Struck!: The Story of Martin Luther four times over a period of five years. During that time, I learned more medieval German than I wanted to know, I studied storytelling, grammar, the Reformation period, and –somewhere in there– I feel like I met Martin Luther. I also wrote a bunch of articles (thousands if I must be honest), published with magazines, started a blog, wrote a three year curriculum for preschool to high school, networked, and went to a lot of writing conferences. It was absolute insanity–but I had a lot of fun. 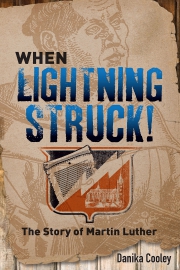 My good friend, novelist April McGowan, critiqued my manuscript over and over, pushing me to allow the story to tell itself. I no longer had a narrative biography, but a piece of historical fiction. Another fabulous friend helped me with my descriptions of the German landscape and critiqued my grammar. To my absolute delight, Chip offered to show the manuscript around. Fortress Press published it, and the rest is history.
I’m thankful for that diving board so many years ago. I’ve decided there’s nothing wrong with doing a few killer belly flops. No one learns to do a back flip without a little pain.
======================
Danika Cooley is a married mother of four and a writer whose work has appeared in numerous magazines and books, including Clubhouse, Upper Room, Keys for Kids, Chicken Soup for the Soul, and Odyssey. Her three-year survey curriculum for preschool to high school students, Bible Road Trip, is used around the globe. You can connect with Danika and find great resources for discipling your children at ThinkingKidsBlog.org.
Share :