GUEST WRITER MAEGAN BEAUMONT is the author of CARVED IN DARKNESS, the first book in the Sabrina Vaughn series (Available through Midnight Ink, spring 2013). A native Phoenician, Maegan’s stories are meant to make you wonder what the guy standing in front of you in the Starbucks line has locked in his basement, and feel a strong desire to sleep with the light on. When she isn’t busy fulfilling her duties as Domestic Goddess for her high school sweetheart turned husband, Joe, and their four children, she is locked in her office with her computer, her coffee pot and her Rhodesian Ridgeback, and one true love, Jade.

My writing career did not start out well. When I was 7, I entered a young authors’ contest through my 2nd grade class. I lost. When I was 12, I turned in a short story as a class room assignment. Instead of the A I was hoping for, I earned weekly sessions with the school psychologist. True story. When I was 15 I entered a short story contest held by Seventeen Magazine. I lost that one too… bat at least no one tried to stick me in therapy.

These three events taught me a few things:

As I got older, I learned there was nothing in this world I hated and feared more than failure. It became a living, breathing thing that I actively avoided, like that mean kid in school who pushed you in the mud on picture day and “borrowed” your milk money.

I never took a creative writing class in high school. I never allowed my friends and family to read what I wrote (for fear of failure… and also a 72-hour bed hold at the county annex).  I never developed what I can now honestly say was a passion and talent for writing. I pretended it didn’t exist because to let people know that I wrote was to invite judgment and criticism—and my arch-nemesis, Failure.

I graduated high school. I got married and had a baby. I finally returned to school—not to pursue a writing career but to pursue a degree in Family Studies. Through it all, I continued to write in secret. Telling no one. Sharing nothing. Avoiding Failure like the plague.  It was in one of my FS classes that I received the first kick in the pants that put me on my path as a writer. I was given the assignment to write my life story.  While I hoped for a good grade, what I got was so much more. I got my paper back with these words written across the front of it:

Have you ever considered writing as a career?

Uhhh… No. Because Failure and I had a mutual understanding—I don’t try too hard and he leaves me in peace. But I kept writing. I had another child. My husband and I adopted two more. I was a stay-at-home mom now and my life was full. Too full for a career. Too full to try. That’s what I kept telling myself anyway…

When I was 35, I completed the manuscript that was to be my debut novel. As soon as I typed that last word I felt a euphoria that is unexplainable unless you’ve actually experienced it. I had completed a novel. But what was I going to do with it. My first instinct was to shove it in a drawer and move on… but I couldn’t. That would’ve been like locking one of my kids in a closet. It was a living thing for me and I couldn’t make myself shut it away in the dark.

This feeling of inevitability came over me and I started to wonder if this was my chance. If this was my window and if so, how long would it be open? My feel or failure hadn’t faded over time, in fact the only thing stronger than my fear of Failure was a new fear I’d never experienced before:

The fear of Never Knowing.

For the first time in what felt like forever, I decided to try. I scoured the internet for agents. I studied submission guidelines. I sent out query letters and received back a half-dozen polite but firmly worded No, thank you letters, telling me that whatever it was that I was doing, I was going about it all wrong.

By now I was determined to see this through. I hate Failure so much that once I decide to try, I’ll run myself into the ground before I give up… and then I’ll claw my way out  and keep on trying. I needed help—I mean, even I knew that 750 pages (the page count for my 1st draft… yes, I know how ridiculous that sounds.) is a bit heavy for a thriller—but I didn’t know where to get it. I tread water for a few weeks and then my 35th birthday came out of nowhere. My husband says to me, “buy yourself a spa day—you deserve it!”

I decided to pay my tuition for a CRW class instead. I entered into Les Edgerton’s “Planning and structuring the novel” class in August of 2010 and had to beg for a waiver to get in. It was an internet class, as Les lives in Indiana, which made things a bit easier for me. At least I wouldn’t actually have to look at people while they judged me. Regardless, I was devastated when I received my first critique back from Les and my class mates—the unanimous decision was that I sucked. Big time.

I didn’t understand proper story structure. I didn’t get the difference between drama and melodrama. I told when I was supposed to show. I was cryptic and vague. My prose was writerly and stiff… but somewhere in the middle of my weekly tongue lashings, I found this buried in the pages and pages of explaining and re-explaining from Les. He said:

Maegan, it’s obvious that you can write.

I clung to that simple sentence like a lifeline. More than ever, I was determined to stick it out because in that moment it had never been clearer—through failure, success is found. I listened and learned for nine long weeks and finally I delivered a workable Inciting Incident. After that, I flew through my re-write in about a year and the finished product was so much better than I ever could have hoped for.

In January of 2012, Les offered to recommend me to his agent, Chip MacGregor, and I said no thank you… Just kidding, I said of course, I’d be honored for a recommendation—and I was. With just a few words, Les wiped out years of fear and self-doubt. That he would be willing to put his reputation on the line by recommending my work to his agent was more validation than I ever could have hoped for. After a few months of back and forth Chip offered me representation and I accepted. This was right around the Book Expo of America in New York held every June and he decided to take it there to shop it around. By the end of the week, he had editors from three publishing houses interested and offering to take a look.

I received a two-book offer memo from Midnight Ink in September 2012 that Chip urged me to accept and I did. Carved in Darkness was released in May, 2013 and has enjoyed some great reviews from some pretty fantastic publications. I’m currently wrapping up the next book in my series and looking forward to writing many more. 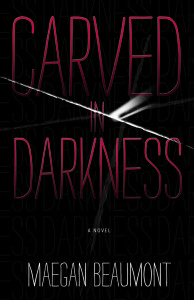 Praise for Carved in Darkness

“Prepare to be overwhelmed by the tension and moodiness that permeates this edgy thriller. Beaumont’s ability to keep the twists coming even when the answer seems obvious is quite potent.”

“Carved in Darkness is a roller coaster of emotion with a scary villain and realistic characters. Beaumont draws you into her world and does not let you go until the very last page.”  – RT Book Reviews

“… Long after you put it down, this story will resonate with you and it will be one of those rare novels you read again and again.” – Les Edgerton, acclaimed author of The Perfect Crime and Just Like That

“… Beaumont knows how to keep you on the edge of your seat. Buckle up for the ride of a lifetime, this one is the roughest rollercoasters you ever had to endure.” – Mark Sadler, Suspense Magazine

” A compelling psychological thriller with a satisfying conclusion. An excellent debut novel.”