I did something like this on my Facebook page awhile back, so I figured I’d try it here!

1. Opening scenes that involve the main character (and his village, family, etc.) under sudden attack from the bad guys (within fantasy fiction). I’d say 70% of the fantasy novels I look at start this exact way. The second most common opening scene in fantasy involves a similar attack, except the focus is on a person or group who is trying to rescue a baby.

2. Books that promise “5 Secrets” or “10 Reasons” but aren’t clear what those 5 or 10 things are within the text (within nonfiction).

3. Salvation stories (within religious fiction). When it comes to a spiritual arc, this is ALL I SEE. It’s as if interesting plots only happen to characters who aren’t yet totally on board with Christianity. Authors need to push themselves to go deeper with their spiritual threads. There is an entire life AFTER one’s conversion. Show me that.

4. Love that is really just lust (within romance fiction). I see it all the time and I’m sick of it. It’s like one moment the characters are casually talking, the next they’re fantasizing about one another’s bodies while claiming to be entirely smitten. Come on. You want me to believe that they’re meant to be? Have them fall in love for reasons other than how attractive they find each other. It makes a better story…and it’s harder to write.

5. Illness stories (within memoir). These stories have value…they just don’t have readers. I mean who wants to read about someone’s cancer journey? Typically, those in the midst of a cancer situation want to escape. Those who have come out of it want to forget. And those who haven’t been impacted by it are living blissfully unaware.

6. Bully stories (in children’s fiction). Yes, bullying is a serious topic. But a story that revolves 100% around a bully plotline just isn’t going to cut it. Kids are smart, and they know when they’re being “educated.” Find a different way to work a bully angle in your story without making it front and center. It’ll have a much stronger impact.

7. Authors who don’t know what’s available their own genre. A prime example of this is within the religious young adult genre. Every conference I run into someone who is complaining about how there isn’t any good fiction for Christian teens…it’s all bonnets and prairies and perfect characters who have scripture memorized. This person then goes on to explain to me why their book will connect with teens because it’s about real life and real struggles! By this point, I’ve already tuned them out because they clearly don’t know what’s available in their own genre. Meaning they probably don’t know what “real life” for teens these days entails either.

8. Thrillers and suspense stories that just aren’t thrilling or suspenseful. If we know the bad guy’s every move, chances are the book isn’t going to be a page-turner. Similarly, if the characters are more focused on their budding romance or their personal lives than they are the danger that is lurking around them, the book isn’t going to deliver. This has to do with knowing the rules of your genre.

9. Books that are a mashup of what’s already out there. You get this a lot with the genetically engineered teens (X-men) who must train at a distant, magical academy (Harry Potter) before being pitted against one another in a deadly game of hide and seek (Hunger Games). I want to see something original!!

10. Authors who hand me their self-published book and expect me to not only be impressed, but to be able to DO something with it. There’s nothing I can do with your self-pubbed book, folks. Not unless you sell 100,000 copies in a year.

I could go on…characters that are flat in Women’s Fiction and Literary Fiction novels, writing that sounds like everything else already on the market, nonfiction that is bone dry and lifeless…

But I’ll spare you.

When it comes to critiquing others’ manuscripts, what annoying things have YOU noticed time and again?

Need writerly-gift ideas for Christmas? Give a copy of THE EXTROVERTED WRITER!

Now available in print or as an ebook. 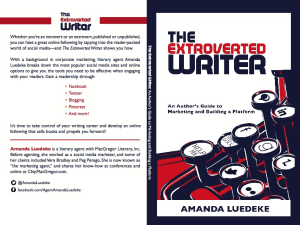